Geophysical situation as of 3rd of June, 2010

Currently we have published 2 earthquake forecasts. According to them we are expecting strong earthquakes in Japan and Greece. Both forecasts are active and situation in the forecast areas remains tense.

Japan forecast was published on April 30, 2010. According to the forecast the expected earthquake region is Sendai city region, expected magnitude is M?6.5.
After forecast publication several events has occurred in the expected region. Short messages about these events are presented on our site.
During last week along Pacific, Philippine, Mariana and Okhotsk plates boundaries, cycle of the small earthquakes (M 4.1–4.9) has occurred. On June 3 cycle came to the land area of Honshu, nearly 50 km from Sendai.
On the map below occurred events are shown as squares. Squares are colored according to the event day. Latest events are red and yellow. 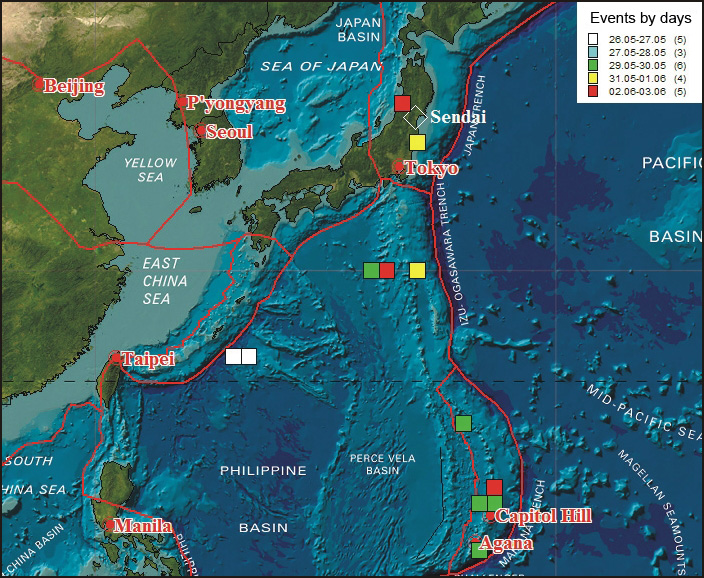 Faults dynamics as the reflection of the Japan earthquake preparation

Together with experts of RC EOM, distant school "Cosmo-meteo-tectonics" on the basis of geophysical parameters set analysis, original forecast, published on our site on May 28, was refined.
Forecast parameters are the following.
Date: before June 15; most probable dates are 5th, 12nd of June ± 2 days.
Region: 37–41°N, 21–23°E and additional forecast area of 2° x 2° size centered on the Thessaloniki city (39.5–41.5°N, 22–24°E).
Magnitude: M?7; estimate based on earthquake clouds (EQ clouds) is M6.4¬-6.9.

Special attention was alerted by the fact of frogs “outcome” at the Landagas region (near the Thessaloniki) on the May 26. This fact was rated as curious by several news agencies:
, Sify News, 26.05.2010

A similar behaviour of the frogs was observed before the strong Eastern Sichuan (China, 2008) and Aquilla (Italy, 2009) earthquakes: 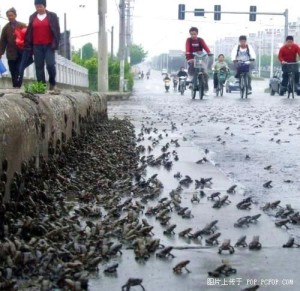 On May 9, 2008 thousands of frogs crossed the road in the region where on May 12 strong earthquake has occurred (Eastern Sichuan, China)

Below there are presented cloud seismotectonics indicators (EQ clouds) revealed by the RC EOM's experts on the images from Aqua satellite along the boundary of Aegian plate and near Thessaloniki city on May 28 and May 29. 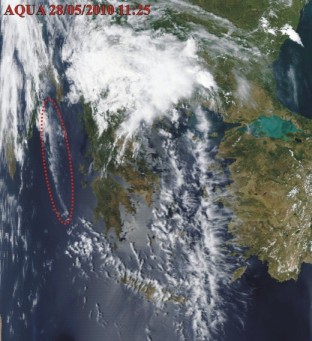 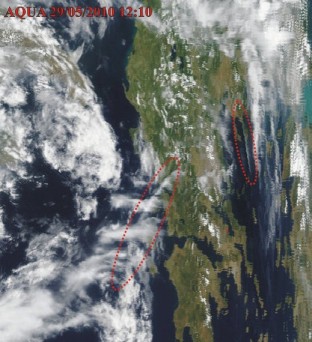 Earthquake forecast was registered by L.N. Doda in the Russian Expert Council for Earthquake Forecasting on May 28.
Information is also presented on the RC EOM's .

Two earthquake preparation zone are located near the 37° parallel. Along that parallel activization of the processes in other seismogenic zones is also possible. Among such zones is California, mentioned in the our long-range forecast. Situation in these zones is being investigated.

We are developing our forecasts on the basis of the gravitation theory developed by the Dr.Sc., Prof. O.V. Martynov (published in the paper in Jn. NONLINEAR WORLD, No.10, vol. 6, 2008) and seismotectogenesis concept developed at the RC EOM (L.N. Doda, published in , mirrored on our site).

According to the gravitation theory, imbalance of the internal Earth structures is caused by the impulse signal in the microwave frequency range which has come from external environment – Solar system space (Sun) and (or) galactic space (Gould belt and etc). This impulse acts on the Earth core and later after conservations laws action compensatory process starts which realizes in the mantle, lithosphere, atmosphere and etc. But initial impulse wouldn't be completely compensated by these processes. This fact is registered by our instruments. Compensatory processes, in particular in the form of volcano eruptions, earthquakes, precipitation and etc, may occur relatively fast or may prepare a long time (even years).