We have performed generalization of enormous amount of data, accumulated by our WBG system since 1988 year till present time, on the basis of discoveries of Dr.Sc. (Geology) V.N. Larin about structure and cyclic activity of our planet, data of Russian Space Agency and a whole number of world scientists about abrupt changes in composition of hydrosphere, atmosphere, lithosphere, and planet position and orientation in space.

Particularly, this is said in the appeal of the independent organization "Science without Borderes" addressed to the UN ():

"...Alarming facts about a drastic (by more than 500%) acceleration of the drift of the Earth’s North Magnetic Pole since 1990 not only have catastrophic consequences for global climatic change but also bear witness to significant changes in energetic processes in the Earth’s inner and outer cores responsible for the formation of the geomagnetic field and endogenous activity of our planet". Electric currents and their periodic sudden changes at the level of Earth core motion deviation are being perfectly recorded by the only instrumentation system in the whole world, that is our torsion system WBG-9. From the 2005 year, our system is recording qualitative and irreversible changes at the level of Earth core. Earth core is losing hydrogen and hampering geodynamical processes of the current temporal period.

What is the threat here? When the Earth core will be stopped, abrupt Earth expansion in the equator zone and collapse at the poles will begin!!! This is catastrophe and this process being nearly simultaneous will concern the whole our planet, all countries and continents. The first will be Indonesia and Australia. Next, both Americas, Africa, Europe and Russia. All governments and financial groups do not comment these planetary changes because they do not fit in the imposed and inappropriate so-called "scientific concepts". Therefore, there is no time for any discussion!

Process is close enough to its completion. At present time, we are performing the last calculations about possibility of its start-up and working out the ways to save civilization. Interested international financial groups can take part, if they wish, in the development of this project of civilization saving. We consider that it is necessary to get Russian Space Agency (RC EOM team and all the staff who is considered by L.N. Doda as necessary) and E. Postolati team (and all of whom she considers necessary) involved in this project on the basis of nadisa.org team. We are ready to accept every honest person of any nationality and political beliefs!!! There is no time to argue about anything!!!

Addition 1 - an answer to the readers.

This appeal can be understood in the following way: the time of whole-planet natural disasters is coming! Not later than March-April of 2011. So every planet inhabitant could know and assess the situation from the view of his own interest. Official science is not able to do this. Financial and government authorities using words about panic as a cover will not do this. So we are the only one who can track and predict situation! And only our group will timely and openly inform about necessity, sequence and available time for people relocation to avoid their loss of life!!! If financiers will join us, we will also inform about required costs for people relocation. Mass media would have said to which a Government organizes or hinders the process of relocation.

Situation is very serious especially in Australia-Indonesia region. This region recently firmly settled in the news because of the severe floods.

We are still proposing cooperation to the regional experts. Corresponding letter were sent to the Indonesia Embassy in Moscow at year-end of 2010.

Third channel of the WBG-3 system from January, 13 is recording specific spikes-peaks which were also observed on January 19 and 21. In my opinion these signals are the precursors of series of strong earthquakes with M7 around the world as the forerunners of the expected catastrophic events on the planet, information about which is present in the Appeal above. 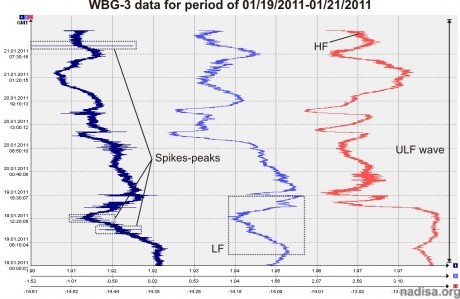 To solve the problem of physical and mathematical justification of the trajectories and sequence of the forthcoming whole-planet events it is necessary to draw in mathematicians-topologists and have understanding of the basis of their calculations, which is the physical essence of the Newton's Definition I: "The quantity of matter (mass) is the measure of the same, arising from its density and bulk conjointly". It is determined by the curvature angle of the Lobachevskiy' space predetermining shape and informational content on our planet. According to this shape and curvature evolution of everything of all, that was, is and will be on our planet, was predetermined. But how to find out this future??? For this it is needed to understand the physics of the entropy constancy of the complex but evolving system, being characterized by the Lyapunov exponents, and ideas of A.Vlasov and I.Prigogine about problems of the stability determination of the complex system (check the book I. Prigogine "From being to becoming" and Kolmogorov's works on entropy). In the work of mathematicians it necessary to consider the  mathematics of the Calabi–Yau manifold on the basis of Gauss and Poincaré works.