Did these events have precursors recorded by our instrumentation system?

These two events are consequence of the processes registered by our instrumentation system on December 4 (polarizing impulse) and December 8–12 (precursors complex) shown on our sire in the messages "Forecast of December 2009" and "On future disasters". These signals are middle-term precursors of the mentioned events (but we emphasize once again that these signals are not fully realized by the occurred events).

Haiti and Chile earthquakes have short-term precursors, registered several days before the events.

During period from 4th till 10th of January, WBG-3 system registered long-period deviation of the torsion system (LF anomaly). HF oscillations (HF precursors) are embedded into this LF anomaly. This signals complex is the short-term precursor of the Haiti earthquake. 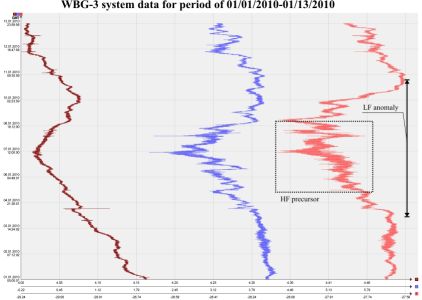 During period from 8th till 14 of February WBG-3 system registered HF precursor of the strong seismic event. Information on beginning of formation of this precursor was presented in the message "Taiwan earthquake forecast is prolonged" (currently only in Russian) on 02/13/2010. Beginning of formation of this precursor was the one of facts on which basis Taiwan earthquake forecast was prolonged.
Precursor character showed that strong earthquake is approaching. In the result on February 26 at the late evening Ryukyu islands earthquake () has occurred with M7.2, and at the morning of February 27 – Chile earthquake with M8.8 (). Let's note that Chile earthquake precursor has observed earlier than 5 days before the event that can be associated with higher process energy and consequently more inertial event preparation. 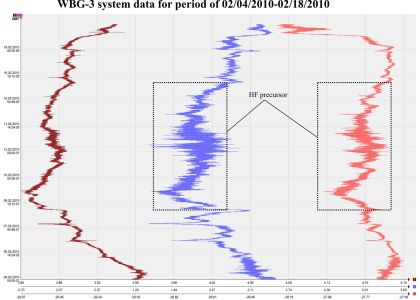 WBG system data as of June 27

High frequency anomalies in the registered signals are still being observed but with slightly smaller amplitude. 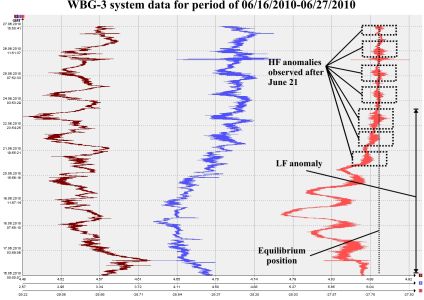 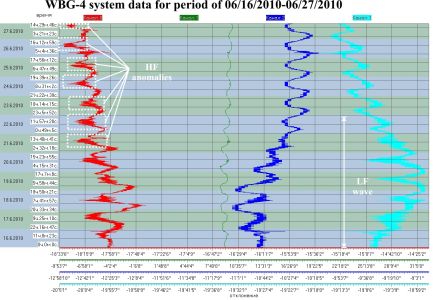 Geophysical situation as of June 26

On June 26 anomalous Earth rotational mode (Earth rotational parameters anomaly) originated on June 21–22 is still being observed. Marked on the figure trajectory fragment is uncharacteristic. It is nearly horizontal during 6 days. 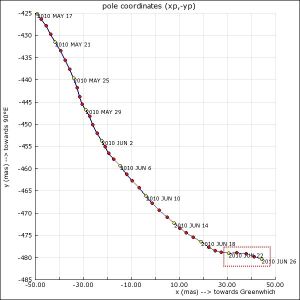 WBG system is still registering HF anomalies, being observed also after Solomon islands earthquake on June 26 (). These data show that strong events are yet to come. 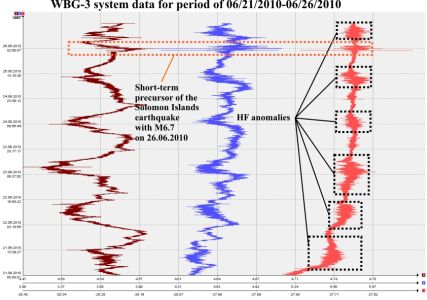 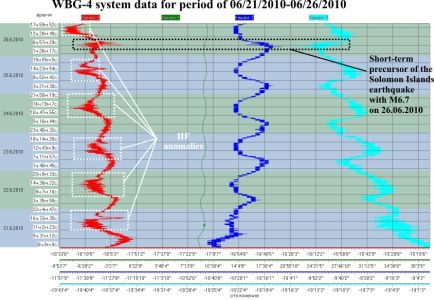 Let's especially note, a short-term precursor of Solomon Islands earthquake, shown on the figure below. It is HF precursor (observed on all WBG system channels), which originates around 02:00 UTC on June 26, about 3.5 hours before the earthquake. 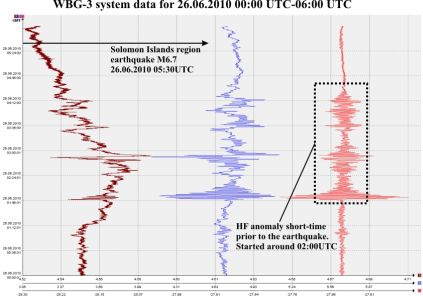 Indicators in the Greece area

In Greece in last days seismic activity abruptly increased in the region located northeasterly of Creete island. During 25th–26th of June, 15 earthquakes with M3–4 (earthquakes parameters are taken from the database) have occurred:

Very interesting question emerges: are these foreshocks or shocks but accounting previously ruptured during previous epochs of planet evolution part of lithosphere?

On the figure below activated area in the Creete region is marked by white rectangle. 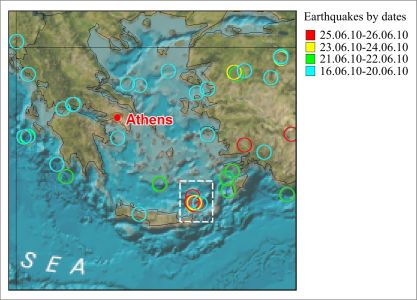 In the result of cooperation between experts of RC EOM, our group and several foreign scientists being a members of the task group, it were revealed several EQ clouds in the Greece area.

Below on the images of Terra satellite of June 22 and June 25 it shown square-like structure located northeasterly of Creete island. This structure is an indicator of the mentioned above seismic processes near Creete. First structure appeared on June 22 is the precursor of these processes. 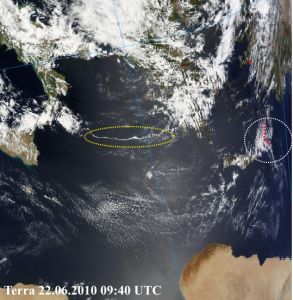 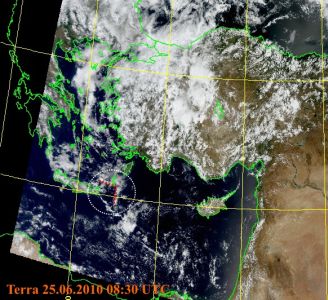 On the image of Aqua satellite of 06/23/2010 it show EQ clouds set above the Ionian sea (between south of Peloponnesus Penisula and Sicily). Linear structure on this image was also shown in the message Geophysical situation as of June 23. It is also can be observed on the first of the shown above Terra satellite images (marked by yellow ellipse). Linear structure directly adjoins square-like. 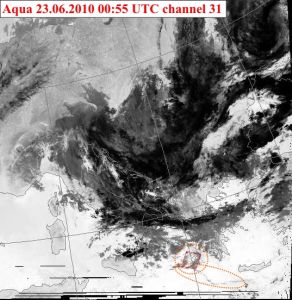 On June 25 square-like EQ cloud was observed above Aegean sea, shown below on the image of Aqua satellite.

Extremely tense situation in Greece area is still remaining. Observed anomalies set shows that we are immediately before the event.

In this section of our site we will publish some our old forecasts, which early reception is confirmed by the documents of the corresponding agencies.

Earthquake information is presented as of 01/24/2010 (seismological agencies sometimes perform corrections on the events in the past).

We didn't submitted short-term forecast to the China Embassy in Russia in 3–5 days prior to earthquake. But from the 1998 year via China Embassy we repeatedly have been offered cooperation to the China Government. It's worth to note that offer made to the PRC is unique. We have offered full unpaid transfer of technology. Unfortunately, our proposal again was left with no response.

After this letters correspondence was terminated by the china side. Though we are still offering our technology to the PRC:
Letter of 06/17/2008.

Earthquake of 2008 has occurred at the distance of 80 km from Chengdu, which was mentioned in the letter of 1998 as the region with highly increased noncompensation on Earth's surface of the polarization potential.

In the strong earthquake preparation process "marking" of the future epicenters take place long time before the actual event. These are the mentioned above areas with maximal noncompensation of the polarization potential. During earthquake preparation hypocenter (central point of the earthquake zone, the point where the fault begins to rupture) is being gradually localizing in the point with definite coordinates, in which lately earthquake will occurr. All these process have specific reflection in our instrumentation system data and on its basis it is possible to develop middle-term (till several years before the event) and short-term (3–5 days before the event) earthquake forecasts. These forecasts corresponds to the definite stages of the future earthquake localization process.

On the following figure WBG-4 signals prior to the Sichuan earthquake are presented.

On May 8–9 of 2008 it was registered intensive high-frequency precursor of the strong earthquake. Analogous signals having different intensity our instrumentation system registers 3–5 days prior to all strong earthquake. This signals carries information about completion of the earthquake preparation.

Using our system it would be possible to perform accurate localization of earthquake preparation region and also time of event estimation so thousands human lives could be saved.

Italy earthquake in 2000 year, near Asti

After mentioned above successful forecast O.V. Martynov was invited to visit Italy. This visit was covered by the Italian mass media (newspapers and TV). If you have any more information than presented on our site please post links to it in the comments section. END_OF_DOCUMENT_TOKEN_TO_BE_REPLACED